Part of the analysis provided by Diederich Healthcare is a look at payment amounts by malpractice allegation: 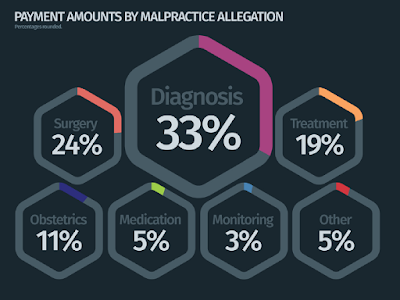 The National Practitioner Data Bank (NPDB) data in 2014 saw an increase of 4.4% in total payout amounts, bringing the total closer to the $4 Billion mark.  In fact, if the trend continues, 2015 could be the year that the United States crosses the $4 Billion threshold.

Several states saw a decrease in medical malpractice payout amounts, such as California and much of the western United States.  However, most states saw an increase – particularly states in the south and the northeast.

New York is again the highest state in terms of per capita payouts at $36.15 paid out for every individual residing in the state.  The northeast as a whole had a per capita payout rate of $28.20, which is more than 3 times greater than the next highest region (the Midwest).

The full payout analysis is 10 pages in length and can be viewed and downloaded at: http://www.diederichhealthcare.com/the-standard/2015-medical-malpractice-payout-analysis/.

The data from the National Practitioner Data Bank (NPDB) was released on February 25, 2015 and has over 1 million rows of information collected from Sept 1, 1990 to December 31, 2014. As the governing entity that keeps records of all negative actions that have been brought against any medical worker, the National Practitioner Data Bank’s goal is to improve healthcare and service for both the provider and patient, as well as reduce fraud and abuse of the medical system. More information about the NPDB can be found at http://www.npdb-hipdb.hrsa.gov.
Posted by M Kennedy, Editor at 1:56 PM No comments: