Breaking news via Law Links Health Links: Lubin & Meyer announced on its Twitter page tonight that they had won a jury verdict in a case involving the death of an 8-day old baby. After much searching and hand-ringing we found the first report providing more details on the case in the Boston Globe. According to a report in the White Coats Blog, the award was $7 million — $3.5 million for each parent and $50,000 for the newborn's pain and suffering. The $11.48 million is the total with interest. Again, according to the Globe report, the jury found a physician and nurse practitioner negligent in care. They baby developed notnecrotizing enterocolitis. Attorneys for the plaintiff were William J. Thompson and Elizabeth Cranford.

Kaiser Health News reports on the findings of a study published this month by the New England Journal of Medicine suggesting that "only one in five malpractice lawsuits results in a payout. The authors conclude that the truth behind these numbers is complicated."

A related Associated Press article on the study in the Philadelphia Inquirer carries these interesting statistics from the study...
The chart below summarizes lawsuits and payouts by specialty as found in the study. 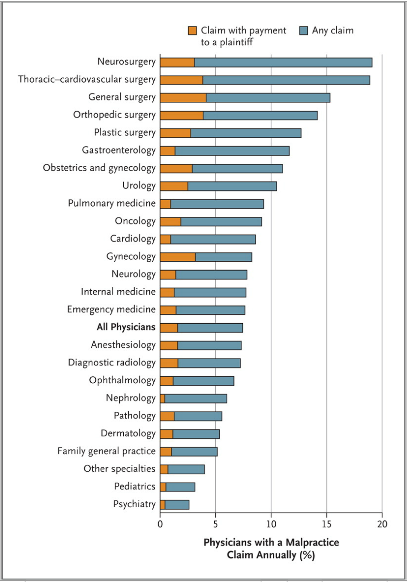 To read the full study and methodology, including more charts like the one above, click on: Malpractice Risk According to Physician Specialty to go to www.nejm.org.
Posted by M Kennedy, Editor at 9:10 AM No comments: