Wyeth v. Levine and the Right To Sue

There has been a lot of press related to the case before the Supreme Court, Wyeth v. Levine, being watched as a potential landmark ruling that would make it easier for pharmaceutical companies to protect themselves from product liability lawsuits. This article on Pharmalot does a good job of wrapping up the loose ends with links to original material. See: The Right To Sue: A Case Against Preemption.

"Now that the key parties have filed their briefs with the US Supreme Court, which will review a case involving Wyeth on November 3, a host of interested parties — including 47 state attorneys general, former FDA commissioners, members of Congress, constitutional experts and editors of The New England Journal of Medicine — have just filed their own briefs arguing against preemption....

The background: During an emergency room hospital visit, Diana Levine was given a Wyeth nausea med called Phenergan, which was administered improperly and caused the Vermont musician to lose her right arm below the elbow. She successfully argued that, even though labeling complied with FDA requirements, the adequacy of the warning still wasn’t established for a particular method of administering the drug.

And she contended Wyeth wasn’t prevented from adding or strengthening the warning on the label, even though the FDA rejected a proposed change. Levine was awarded more than $6 million and, despite appeals, the Vermont Supreme Court sided with her. But Wyeth has appealed again and now the US Supreme Court will review the case.

See the whole article here, with links to lots of related information and briefs.
Posted by Malpractice News Editor at 12:48 PM No comments:

What is a medical error? Here's a list of 28 things that should never happen in a hospital

This list of 28 errors that should never happen is part of an article on MSNBC: More states shred bills for awful medical errors. The list is created by the National Quality Forum, a nonprofit health care safety agency, it includes:

Currently, according to the report, hospitals in 23 states don't charge patients for these errors. Gee, that's nice of them, huh? 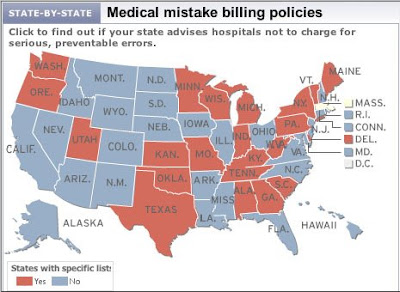 Posted by Malpractice News Editor at 8:30 AM 2 comments:

The San Jose Mercury News reports from Modesto, CA that:

"A jury has awarded $8.5 million to the widow of a man who died on the day a surgeon was going to discharge him from the hospital.

Because of medical malpractice limits, 38-year-old Holly Stinnett likely will receive only $1.6 million of that amount."

See news account here.
Posted by Malpractice News Editor at 8:43 AM No comments: